Bridget Behr and her family migrate from the bustling Amish community where she grew up in Ohio to the mostly unpopulated Upper Peninsula of Michigan after a stalker breaks into their home. While her father and brother try to find work in the area, the family is forced to reside in a borrowed RV until the house and barn are rebuilt. While Bridget is hoping for a fresh start, she’s afraid to trust anyone—even Gabriel, the overly-friendly Amish man who lives nearby. Bridget thinks he’s a flirt who serial dates and doesn’t even remember the girls’ names.

Due to not enough construction work in his Florida community to keep him out of trouble, Gabriel Lapp has been sent to Michigan to work. His father is desperate for his son to settle down. When the family walks into Gabe’s home in the middle of a thunderstorm and he discovers their circumstances, he offers to help with construction. For Gabe, the beautiful girl he teasingly calls “the recluse” once he discovers she doesn’t attend youth events, confuses him like none other.

As Gabriel and Bridget grow closer, they realize there is more to a person than meets the eye. Just as Bridget is finally settling into her new life, and perhaps finding love, tragedy strikes. Now Bridget and her family must decide if they should move to another Amish community, or dare to fight for the future they’d hoped for in Mackinac County.

This is an incredible Amish romance!

From the very beginning I was captivated by Bridget. She is an extremely well developed character with many facets. The fears and conflicted emotions that she has were easy to understand with the background information that is given about her life before moving to the Upper Peninsula.

The development of the rest of the main characters was just as thorough. I feel like I got to know them and the motivations for their actions too. There were so many heavy burdens that were being dealt with it seemed as if it were real life. This book is not a light escape as some are.

I loved the fact that there were strong believers. They were doing all that they could to help Bridget, Gabe and the others who were struggling, to draw closer to God and trust Him more. The journeys that Gabe and Hosea, Bridget’s daed, had to take were very realistic. They were both very understandable for men going on to be strong spiritual leaders.

This book is so wonderful that I have to give it a rating of 5 stars. I am definitely highly recommending it. I’m looking forward to reading the next book in this series when it comes out. I don’t even know the title for it, but it is already going on my to-be-read list. 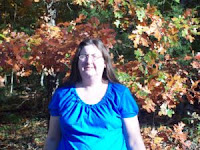 Laura V. Hilton is an award-winning, sought-after author with over twenty Amish, contemporary, and historical romances. When she’s not writing, she reviews books for her blogs, and writes devotionals for blog posts for Seriously Write.

Laura and her pastor-husband have five children and a hyper dog named Skye. They currently live in Arkansas. One son is in the U.S. Coast Guard. She is a pastor’s wife, and homeschools her two youngest children.

When she’s not writing, Laura enjoys reading, and visiting lighthouses and waterfalls. Her favorite season is winter, her favorite holiday is Christmas.

I read a series of books a year or so ago by another Amish author who had set her books in Michigan’s Upper Peninsula. As a Michigan native, I was curious, and I researched, but found nothing about Upper Peninsula Amish except a notation that one had tried and failed. So I contacted the author. She told me that she’d never been there, and her research had all been hearsay, so with that lack of firsthand knowledge and no trip to the Upper Peninsula planned, no trip to see for myself would be possible. At least at that time.

Then God intervened. My son who is in the United States Coast Guard was stationed in the Upper Peninsula this past summer (2017.) He saw the Amish driving around in their buggies. And he felt like a stalker as he followed one to see where he went and drove through the area. He even sent pictures. (Shhhh.)

Yes, there are Amish in the Upper Peninsula – at least at the time this book was written.

Okay, as a Michigan native, I used some terms that may not be familiar to non-Michiganders. A Yooper is someone who lives in the Upper Peninsula. A Troll is someone from the Lower Peninsula. A pastie is kind of like a Hot Pocket, except it’s a meat pie made with root vegetables such as carrots, potatoes, and rutabagas. They are so good. And the straits are the area of the Great Lakes connecting Lake Michigan and Lake Huron.

As for the wildfire, the earliest wildfire I could find any documentation on in the Upper Peninsula was in April. It is generally a snowy area — trust me. I lived near the Muskegon area and saw snow drifts in May. We sometimes had over six feet of snow on the ground at one time. So, to get the wildfire when I wanted/needed the wildfire I used artistic license. Yes, fires really happened in Michigan’s history. Just not in the month mentioned in the book. 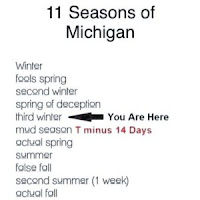 I am attaching a meme about Michigan seasons. We’ll call the fire set in “fool’s spring.” My son got married during the “third winter” this year. April 21 and there’s snow on the ground. He and his beautiful bride got married at a water fall (Tahquomenon Falls) very near where the story is set. 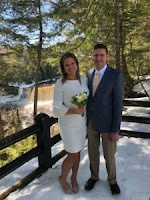 Thanks for reading Firestorm!! 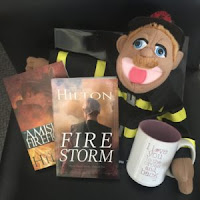 To celebrate her tour, Laura is giving away

First place prize of “I Love You to the Cross & Back” Mug (Gardenfire) & Firestorm by Laura Hilton!!